So I attempted to mountain bike race this weekend. I hadn't planned on it but I thought it would be fun to give it a try! Mike and I left Saturday for Albuquerque and went to the temple. We then switched into our bike gear and did a practice run of the beginner loop of Cedro Peak. I was loving it. It was really fun to ride through the woods and it didn't seem bad at all. There was one part though called The Hills of Death...and I had to walk it up, but I kept thinking that even that wasn't bad. I felt pretty good too because the beginner loop was only seven miles and I usually end up doing about eight when we do the Dona Ana's back in Las Cruces.

Boy was I wrong! It is so different when you race! Don't get me wrong, it was fun, but it is so much harder! At the starting line you have to push your way through bikes and when we turned off the road the first person got stuck so we all had to hop off our bikes and run around them. I was flying downhill trying to keep pace and not have people pass me. It flustered me a little to the point where my front wheel hit a big rock and then I went flying over the handle bars with my bike landing right on me!

After I regained composure...I was good. Even though a god number of people got in front of me, I still kept pushing. What seemed like an easy ride before was really hard! I was breathing a lot harder due to how nervous I was! The only people that passed me were pro riders and a couple men, which was fine with me, because they were not in my category! Haha..

When I got to the Hills of Death I was beat...I made it up a little and then jumped off my bike and started running up the hill. One mile later I was able to hop back on and get my bike up the mountain. It was so hot! While I was running up, I made it up to this guy in front of me who was resting under a tree, but as soon as he saw me he started running again! (I seem to have that effect on people!). After that, it was all down hill!

I made it to the end in fifty three minutes and I was good to go. I got first out of two people in the 19-29 category and got the prize for second place over all for the women's beginner division. I got beat out by a 12 year old girl...who made it in 38 minutes. She seriously rocked it.

Lots of fun and very hard work! I think I'm going to race the Farmington Race and Gallup too. 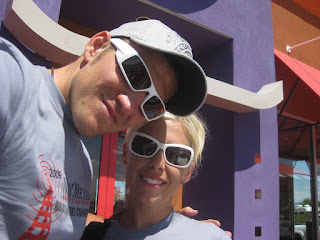 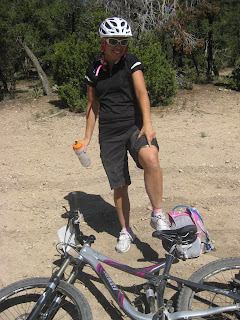 Mike at the starting line... 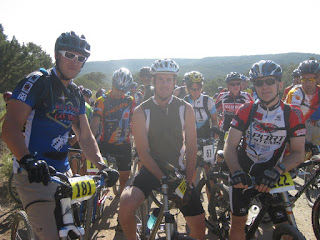 At the starting line... 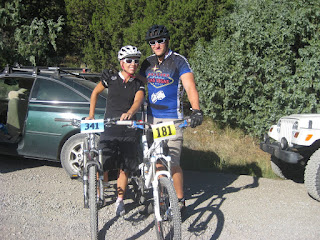 Liz, I am definitely impressed! Mountain biking scares me...

All I have to say is DANG GIRL, you rock!