One of the Most Memorable Halloween Weekends Ever

Brittany and I were talking at FHE about when our best Halloween was and for some reason for both of us, the story of when we went to Utah popped in our heads. I don't know if it was because it was the most random weekend ever, but it sure was one of the most memorable weekends.

I found a few pictures from that weekend so I had to post it in honor of Brittany and the Halloween weekend of FUN!

It all started with a drive up to Provo, where we decided to stop in Beaver, Utah. Bad mistake. We didn't know that when you pull in the gas stations there that workers immediately walk up to you and try to wash your windows. Was I supposed to tip them? If so, how much? Let's just say in all the awkwardness the guy got 5 bucks. Way too much for his own good. Meanwhile, Brittany leans over and got honked at for her bootilicious self. Haha. This picture was taken to remind us not to stop in Beaver on the way up to Provo ever again: 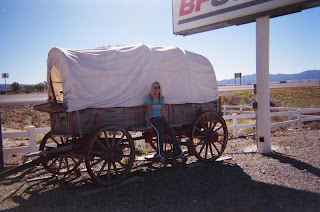 The night we got there consisted of party hopping. We ended up at some mansion in Salt Lake City which had a movie theatre and humongous back yard. Loved it. This was taken in the kitchen where I downed pizza and root beer: 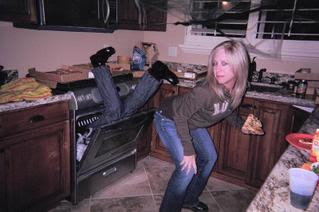 We decided we weren't done yet. So, we drove around Provo looking for some fun and were up to no good. Until...we came across we thought was a youth dance, but later found out it was a YSA dance where every single person had a costume on except us. We were dancing on the floor and realized everyone was moving away from us out of embarrassment. This was taken at their random Monsters Inc. board they had: 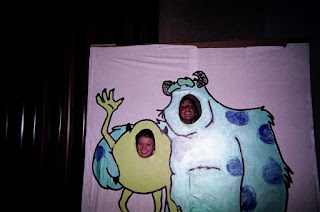 We then decided to leave the awkwardness and go to another party we spotted across from my old apartments at the Belmont (when I lived up there for the summer). The rooms were packed wall to wall. Brittany was grabbing butts, people were dancing on tables, people were breaking tables they were dancing on..it was a good time.

And then when driving home, I hopped out of the car to get a picture with the random person walking down the street as Strongbad: 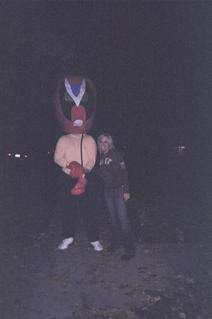 And pretty much the rest of the night was spent at Christa's apartment getting harrassed by people across the way that left a pumpkin with a huge knife stuck in it on the doorstep and then decided to chase us with a real chainsaw. At that point, I peed my pants.

Good times. Good times. This was for you Britt.
Posted by Liz at 9:35 AM