A Trip Down Memory Lane

So I came across my old mp3 player from 2007 that has a ton of songs downloaded on it and I got it working! So I've been bringing it to work to listen to while I calm down at lunch and after school. I absolutely love it. There is something soothing about music and it also makes you feel so many emotions. I am really sentimental, so when I hear a song it reminds me of times in my life or people close to me.
These are some old school songs, but here are some I found on it:
Tim McGraw- Taylor Swift. This was way back when she first started and I would watch her reality on MTV when she was trying to make it big. Can you remember that?
Petey Pablo: Freak-A-Leak. Totally reminds me of Liesl and Hilary when we would go to parties and dance the night away! This used to be the ringtone on my phone.
Natasha Bedingfield: Unwritten. Back when I was obsessed with the Hills I would listen to this blasting in my car.
The Ataris: Boys of Summer. Reminds me of Kaycee when we would go DDR at the Las Vegas Hilton.
Beyonce: Irreplacable. Reminds me of when Michelle and I went to California and this song was constantly playing while we shopped with lindsey in the Fashion District. So fun.
Yellowcard: Way Away. Driving down the 101 from LA to San Diego. Awesome memory!
Jason Mraz: Remedy. Driving the backlots of Walt Disney World the summer I worked there and watching the fireworks from EPCOT in the sky.
Rob Thomas: Little Wonders. I just love that song!!!
Kanye West: Stronger. I would work out at the LVAC playing this while I was running. Such a good workout song.
Ingrid Michaelson: The Way I Am. Living at my dad's house while I would drive through the senior retirement home neighborhood.
Diamond Rio: Imagine That. Senior Year. High School.
Samantha Mumba: Gotta Tell You. Back when boy bands were big and girl bands too and when the girls and I would go to every concert imaginable.
Avril Lavigne: Complicated. Introducing the number one video on TRL.
Posted by Liz at 3:18 PM No comments:

On Saturday, October 23, the crew set out to do a 12 hour relay mountain bike race in El Paso. Jonny, Kimball, Brad, Jared, Lisa, Paul, Mike and I showed up to race for five different teams. Jonny, Kimball, and Brad were on one team. Jared joined another four man team. Mike was on a Crazy Cat four man team. Lisa and I were on a four girl team. And Paul raced on a duo team.
Lots of racing!
Here is Brad warming up for a lap. 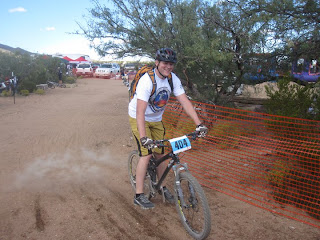 The most crazy part is trying to rest in between laps. I tried to chill but I got too ancy!! Here is Lisa and I waiting for our girls to come. Her team beat mine. 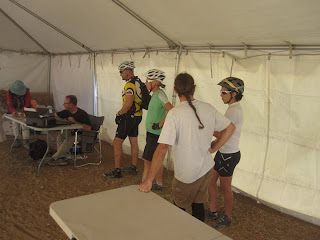 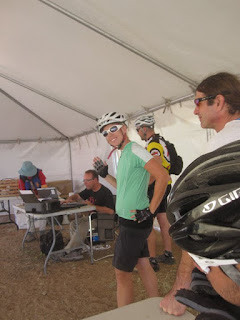 Abel coming in and Jared taking off! 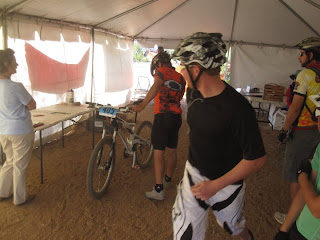 Mike getting ready to go out on his night ride. Night riding was so hard cause everything is two dimensional. I added like ten minutes on my time because of how sloppy I was! 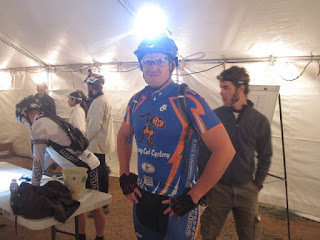 Going out for my fastest lap. I was trying to hurry cause our team was losing. 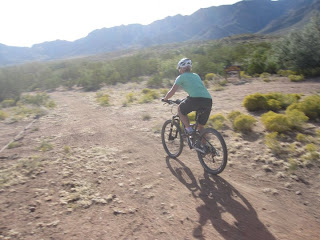 You had to make the exchange in the tent and as soon as you called out your number, you took off! 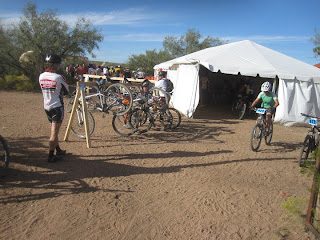 Overall it was a very fun and exciting day. I wish we got more pictures!

Mike and Wayne decided to head over to Las Vegas and try out the Viva Bike Vegas Century ride (115 miles!) through the Las Vegas Valley. The cool thing is that this race included a ride across the new Hoover Dam bridge. Unfortunately, Mike and Wayne were too late to sign up so they couldn't do the bridge, but they did everything else!
The guys at the starting line in downtown Vegas. 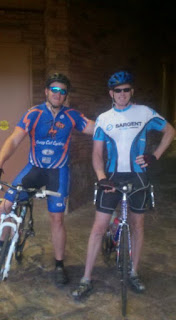 At the starting line and sitting with all the "faster" roadies. 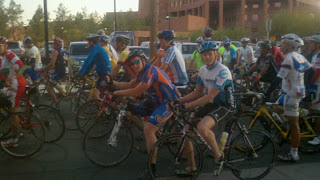 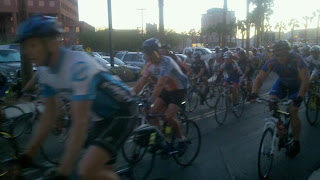 The banners and set up. The riders got steaks from Outback when they returned. Nice! 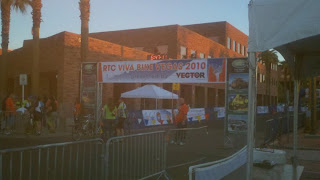 Mike and Wayne made some good time. The first fifty miles only took them three hours and they were able to complete the whole thing in about six hours. Considering Mike was on his mountain bike (with road wheels), we consider this a major accomplishment.
Congrats to you both!

A Quick Day With The Family

While Mike and Wayne did their century ride in Vegas, I had a whirlwind day with the family. It started out with Jen picking me up downtown and heading down to Henderson to meet with dad and the nephews to see Mike ride by.
We headed over to Mission Park and played for a little bit while we waited. We found this amazing slide and found out it was even better when you used Sarah's jacket to fly down. 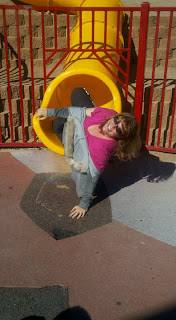 But...there were some catastrophes. 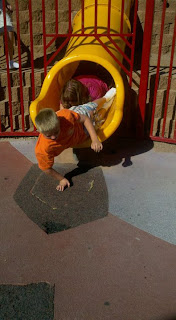 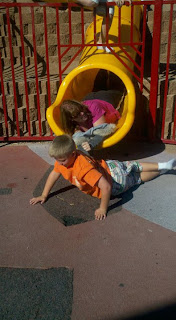 The rest of the day consisted of passing off water and gatorades to the bikers, going to Dad's to play Sequence, shopping with Mom and Sarah, eating some amazing sushi, and having a late night chat with my dad at In and Out when he got off work.
Such a fun one day visit!

We drove up to Farmington, New Mexico for our last race of the season! It is a 30 mile course full of lots of downhill and really fun whoop-de-doos!
Kimball, Brad, Brent and his girls, Mike and I headed up for a day of perfect weather and friendly rivalry.
Here are the highlights:
I'm hiding in the gackle of people at the starting line. We ALL started together, including the Cat 1 and Pro riders. 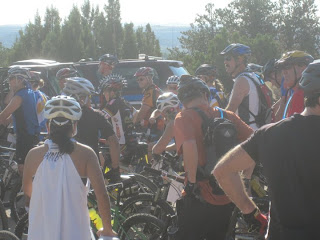 We got in late the night before, but our hotel was awesome compared to the usual Super 8. 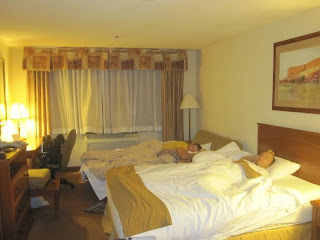 Kimball wanted to take a picture next to this sign. He got a big kick out of it! 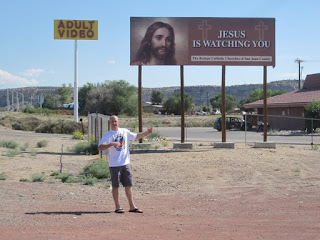 The whole gang after the race! 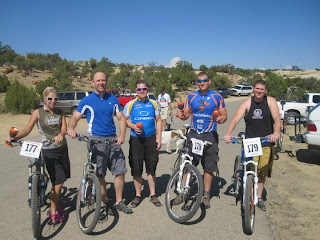 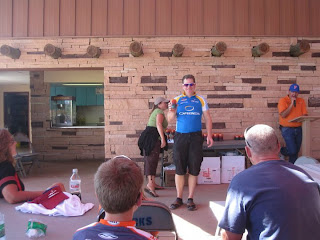 I won first place in my category, even though this was not my best race. I had to walk on some of the downhills because they were VERY steep. People were screaming as they were flying down them. 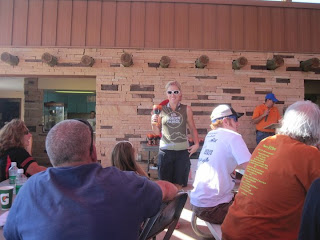 Michael got second place! And fifth overall! He worked so hard and it paid off! 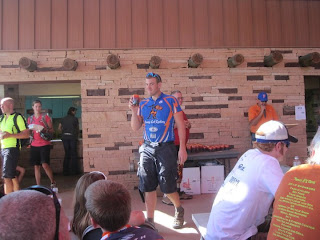 Brad and I battled it out on the road for a while. It got to the point where we were neck and neck and were taunting eachother. Brad was yelling "You can't let me beat you Liz!". When I started to pass him, he screamed "I hate you!". I was screaming just because it was funny. Meanwhile, there is a girl with us racing too and she was giving us the funniest look. Poor girl. 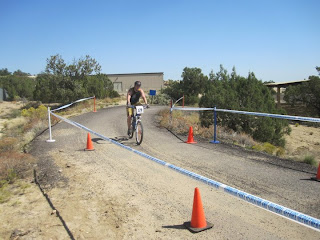 I made it. Even though my legs were cramping really bad! 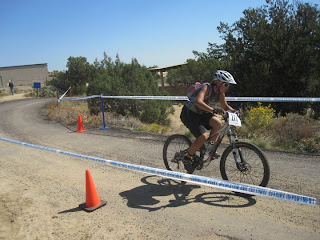 It was a really fun roadtrip too. Even though I was the only girl, it was really funny to hang out with the guys and hear the things they had to say. We all had so much fun!
Posted by Liz at 9:03 AM No comments: